The Ministry of Finance (“MOF”) and the State Administration of Taxation (“SAT”) jointly released the Circular on Implementing Inclusive Tax Relief for Small and Micro Sized Enterprises on January 17, 2019 (the “Circular”), in which a preferential tax cut policy has been implemented for three years (applicable for taxes paid from January 1, 2019 to December 31, 2021). We hereby highlight two major tax incentives mentioned in the Circular:

According to CIT Law, the general CIT rate is 25%; however, for small and micro sized enterprises (“SMSE”), a preferential tax policy with lower rate (“Preferential Rate”) is applicable. Upon issuance of the Circular, more enterprises can be regarded as SMSE and the Preferential Rate has been reduced, specifically:

(1) Scope of SMSE is expanded. To qualify as a SMSE, three conditions shall be met simultaneously. According to the Circular, all these three conditions have been changed, as summarized below: 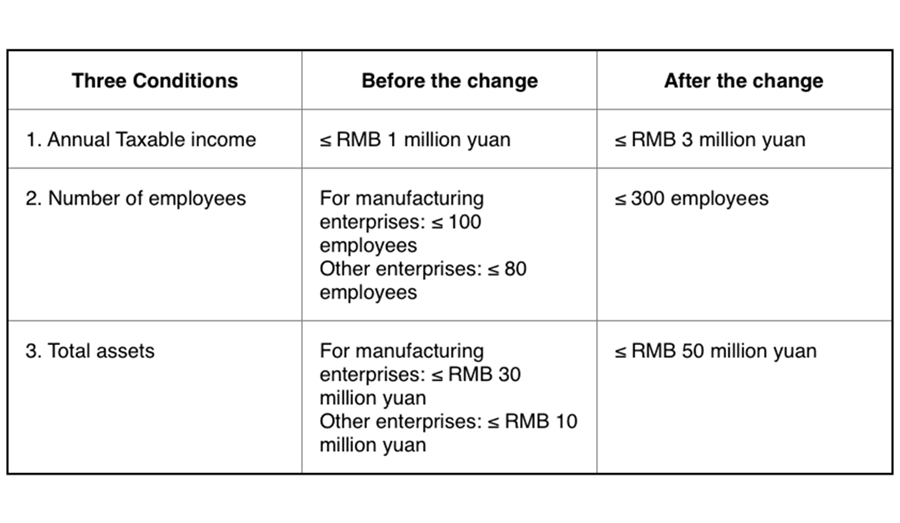 The Circular is a strong sign that the Chinese government aims to reduce enterprises’ tax burden to stabilize the economy. It is estimated that China will cut the tax burden for small and micro sized enterprises by RMB 200 billion, covering more than 95% of enterprises.

The Circular on Matters Concerning Applications of Foreign-invested Enterprises for the Survey Qualification of Construction Projects (the « Circular ») was released by the General Office of the Ministry of Housing and Urban-rural Development (« MOHURD ») with effective date as of January 10, 2019.

The Circular contains only one sentence but clearly addresses the ambiguous process for foreign-invested company to apply survey qualifications of construction project. It clearly states that survey business for construction projects does not fall in the scope of prohibited and restricted industries for foreign investment under the Special Administrative Measures for Foreign Investment Access (Negative List) (2018 Edition) (“2018 Foreign Negative List”). To follow up the principle of equal treatment to domestic and foreign investment where activities are not prohibited or restricted in 2018 Foreign Negative List, the Circular further stipulates that upon releasing of the Circular, applications for survey qualifications of construction project submitted by foreign invested enterprises (including newly-incorporated, restructured, reorganized, merged, or acquired foreign-invested enterprises) shall follow the same requirements as that of the domestic invested enterprises.

Recently, Beijing IP Court pronounced a judgment on a trademark infringement dispute in relation to “Wechat”, which is the trademark of the most widely used messenger platform for Chinese people developed by telecommunications giant Tencent.

According to the judgement, Shenzhen Company is now forbidden to use characters “Wechat” in its company name and shall pay RMB 10 million yuan to Tencent as compensation. The court ruled in favor of Tencent on the following grounds:

1. Upon review, the trademark “Wechat” is regarded as a well-known trademark and its exclusive right shall be protected; Using the logo “Wechat” without authorization is a trademark infringement.

2. Using characters of a third party registered well-known trademark in its enterprise’s name which mislead the public shall be sanctioned under PRC Anti-Unfair Competition Law. Consequently, Shenzhen Company shall fulfill formalities of change of enterprise name within 10 days of the judgement coming into force; and

The year 2019 marks the 55th anniversary of the establishment of diplomatic tie between China and France. On January 27th, 2019, president Xi Jinping and his French counterpart, Emmanuel Macron, pledged to work together to uphold multilateralism and promote bilateral ties for the global future. Xi and Macron expressed their willingness of promoting cooperation as permanent members of United Nations Security Council to safeguard the world peace and stability. The two countries will also hold hands to improve economic and cultural exchanges.

According to Chinese Ambassador Zhai Jun, the following figures occurred in 2018:

In addition, in October last year, the China-France Oceanography Satellite was launched into space, marking the official launch of the “China-France Year of the environment”. Zhai further expressed that China hopes to further develop the cooperation with France in the field of nuclear energy, aviation and aerospace, and strengthen ties in emerging areas of agricultural integration, digitalization, medicine and health, green development and artificial intelligence.

On January 24, 2019, Chinese State Councilor and Foreign Minister Wang Yi visited France for the 18th consultation of the coordinators for the China-France Strategic Dialogue. He stressed that China is willing to strengthen the alignment of respective policies and development strategies with France and improve cooperation in exploring the third-party market. With the further pursuit of “Belt and Road Initiative”, the bilateral trade and investment will be improved. The implementation of the new legislations on foreign investment will also create a favorable environment for the development of the economic exchanges. Wang also complimented France for welcoming Chinese investment and for its commitment to open its market to Chinese investment without taking discriminatory measures.