China legal update: NCP Outbreak: What you should know about the Preferential Policies to Support Enterprises in China and the quarantine requirements

21 Fév 2020 China legal update: NCP Outbreak: What you should know about the Preferential Policies to Support Enterprises in China and the quarantine requirements

NCP Outbreak: What you should know about the Preferential Policies to Support Enterprises in China and the quarantine requirements

Given the important role of enterprises in keeping employment stable in China, a list of cities and provinces gradually released several measures to support the enterprises to win the battle against the Novel Coronavirus Pneumonia (”NCP”) epidemic. We hereby highlight the following important ones for your better understanding: 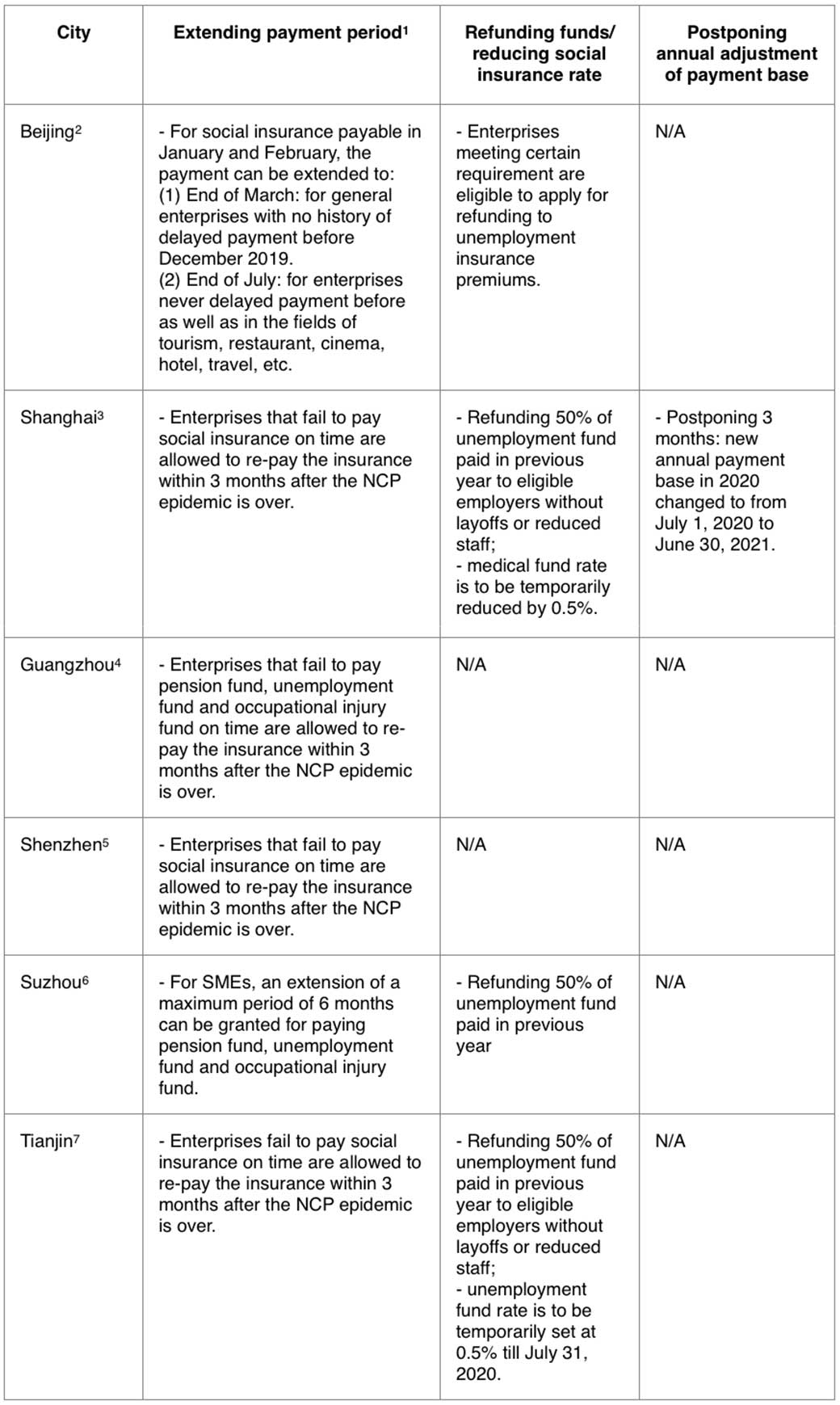 Further to the above preferential policies, during the State Council’s executive meeting scheduled on February 18, 2020, premier Li Keqiang further stated that SMEs outside Hubei Province will be eligible for an exemption from February to June 2020 for the following funds: pension fund, unemployment fund, medical fund and occupational injury fund. Large enterprises outside Hubei Province will be reduced 50% from February to April 2020. Please liaise with us for official legislations to be released by each city to see how this new policy will be implemented practically.

(1) Tax declaration deadline postponed to February 28, 2020
As mentioned in our previous legal update, tax declaration deadline was to be extended to February 24, 20208. On February 17, 2020, such deadline was announced to be further extended to February 28, 2020 nationwide, except for Hubei province. In addition, for enterprises which are still unable to meet the deadline, an application for further extending the deadline can be made at local tax authority. The specific extension application procedure will be further clarified by local tax authority.9

(2) Tax incentives for enterprises controlling NCP epidemic
The State Taxation Administration and the Ministry of Finance have jointly released a series of tax incentives during the NCP epidemic, including deduction/exemption in corporate income tax and value-added tax for certain enterprises related to NCP epidemic control10. To be specific, the tax incentives are not widely applied for all enterprises, but only for the following:

The tax incentives are retrospective from January 1, 2020 and the deadline is not released yet.

According to a notification jointly released by Ministry of Human Resources and Social Security and three other governmental authorities12, for enterprises who do need to suspend the production and operation, the salary of their employees shall be paid as follows:

(1) Within one payroll period (1 month for most enterprises), the regular salary is to be paid as normal.

In addition, enterprises that have difficulties in production and operation affected by the NCP epidemic can temporarily adjust their employees’ salary, arrange work rotation, change flexible working hours and so forth through the consultation with employees.

Note: To suspend the operation or adjust the current HR arrangement, enterprises shall abide by the specific procedure requested by the authorities as well as in line with the PRC Labor Contract Law.

On January 28, 2020, Wanda Group announced that the rental fees for all Wanda Plaza tenants during the period from January 24 to February 25 will be exempted17. Since then, many large commercial groups have followed Wanda’s lead by offering reduction or exemption on rental fees. From the governmental point of view, local governments have correspondingly introduced a series of policies to relieve the pressure for enterprises during the NCP outbreak by reducing or exempting the rental fees. According to the current policies, state-owned landlords and other landlords have different obligations. We highlight below for your reference: 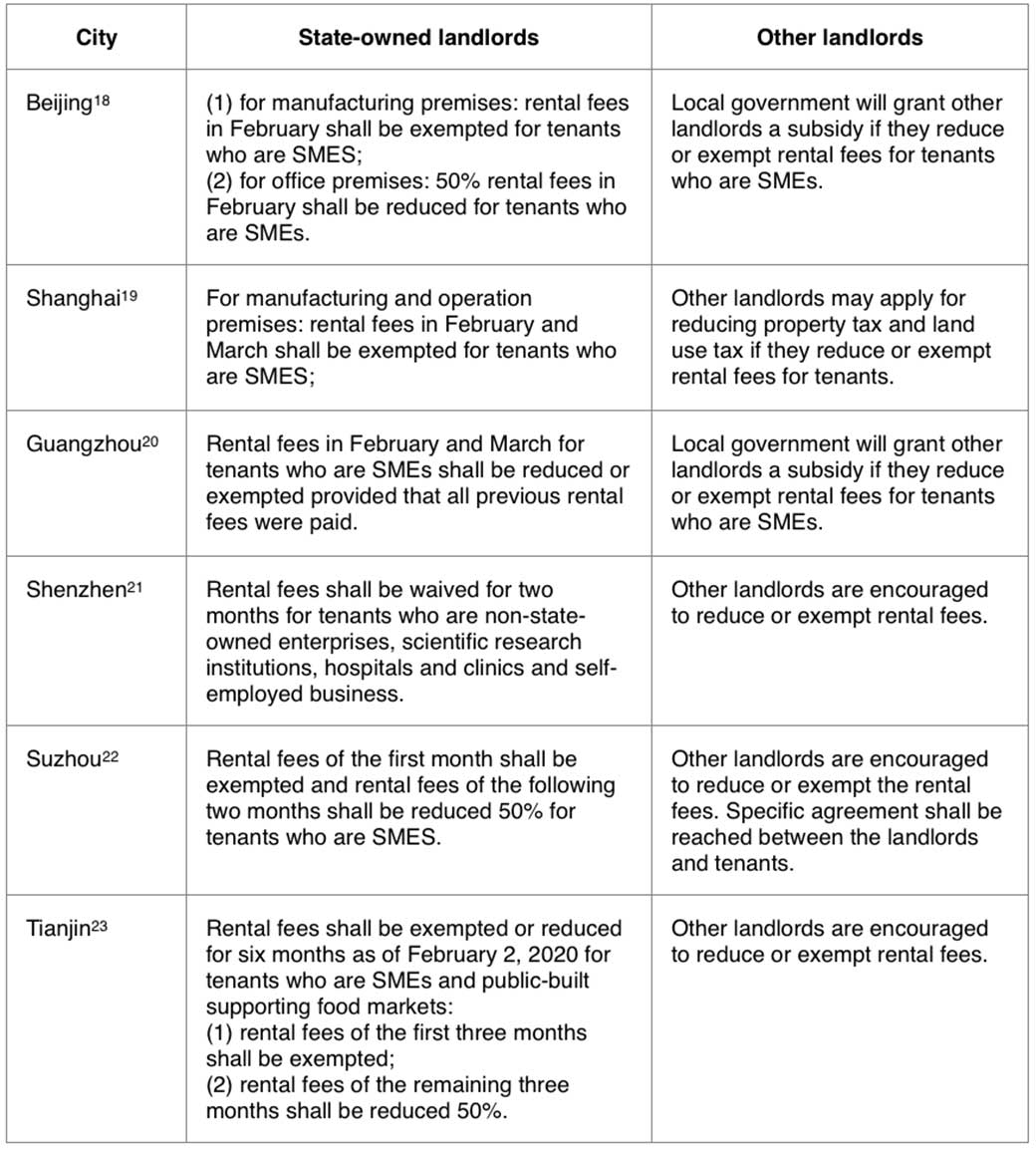 In addition to the above incentives, China also released other incentives including but not limited to encouraging the financial institutions to provide supportive financial services, reduce the price of natural gas and water, subsidizing research and development (R&D) of enterprises, providing training fee subsidy for enterprises who organize employees to participate in online vocational training.

Foreign enterprises are advised to contact the local governmental authorities for a better understanding on the preferential policies. Should you need to have more details of the rules applied in your city, please feel free to contact us at asiallians@asiallians.com.

As the amount of NCP victims and suspect victims continue to rise, many cites have declared 14-day quarantine requirements. For example: 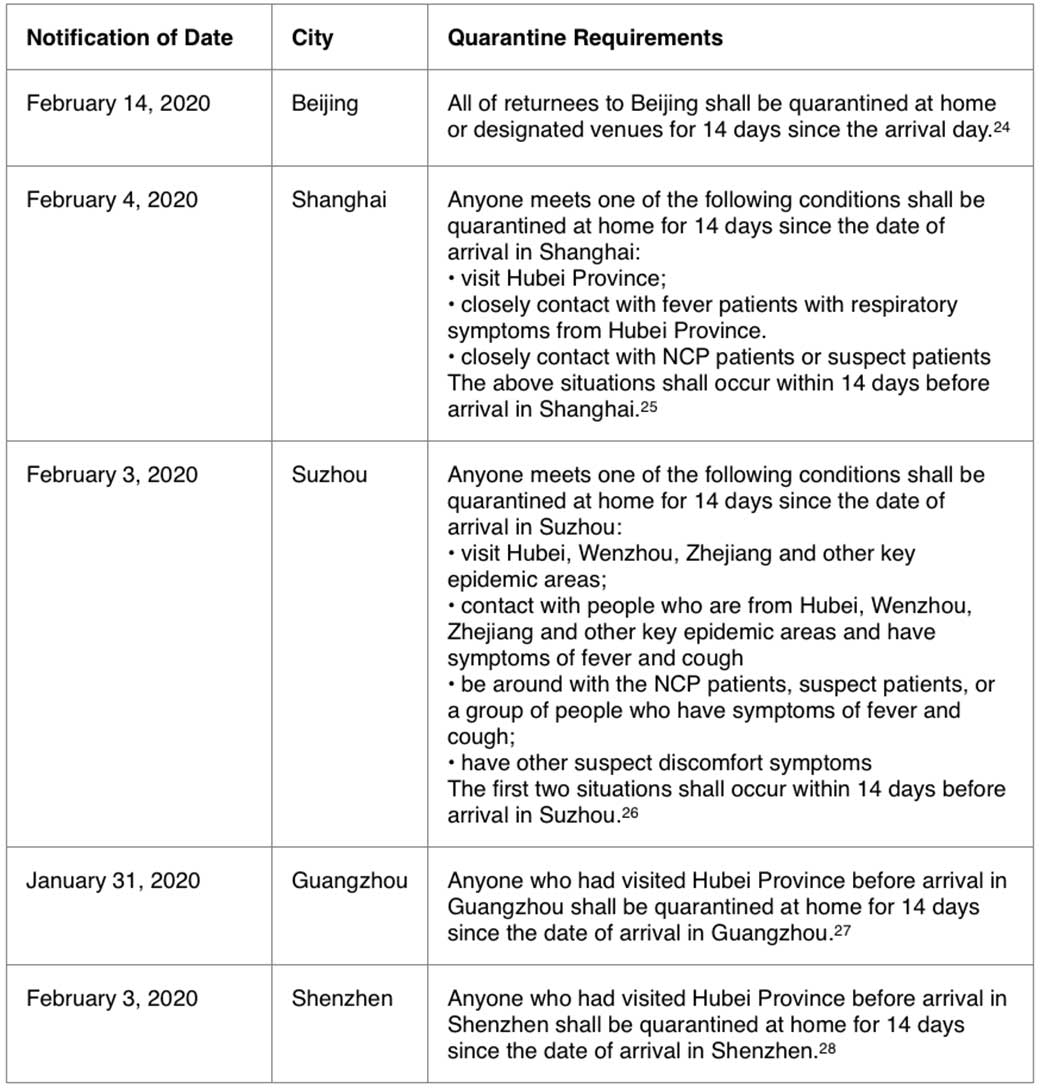 To be followed next week by a legal update about Litigation and Arbitration Adjustments During NCP outbreak.

1. To enjoy the extension, enterprises shall file an application to local government.

8. It can be further postponed in Hubei province and other regions where the NCP epidemic is serious, see our previous legal update:
http://asiallians.com/en/china-legal-update-coronavirus-outbreak
-china-shall-enterprises-pay-attention/