We summarize the following table of the 2019 average monthly salary of some major cities and corresponding ceiling amount for your reference1:

However, Beijing, Shanghai, Shenzhen and Guangzhou implemented special rules to decrease the ceiling amount of social security contribution base in order to reduce the burden on enterprises during the COVID-19 epidemic. Taking pension fund base for example:

In Beijing, 2019 average monthly salary for employees working in legal entities is RMB 11715 yuan/month, and this is the amount used for calculating ceiling amount of paying severance payment. However, for calculating the base of pension fund, HR Bureau stipulated that RMB 8847 yuan/month2 is applicable, which is the monthly average salary for employees working in all kinds of units (not only for legal entities).

We summarize the following table for your reference:

On July 31, 2020, the National Development and Reform Commission and the Ministry of Commerce jointly issued the draft Catalogue of Encouraged Industries for Foreign Investment (2020 edition) for soliciting public comments till August 30, 2020 (the “Draft Catalogue”).

The Draft Catalogue lists industries where foreign investment is welcome and aims to replace the 2019 edition. Specifically, the Draft Catalogue keeps consisting of two sub-catalogues mentioned in the 2019 edition, one of which is the national list applies to the whole country, and the other one of which is applicable to 22 provinces in China’s central, western and northeastern regions5. The major change of number of items is as follows:

In the Draft Catalogue, sectors such as manufacturing of high-end products, research and development and so forth are especially welcome foreign investment.

We highlighted few of the added items for your attention: 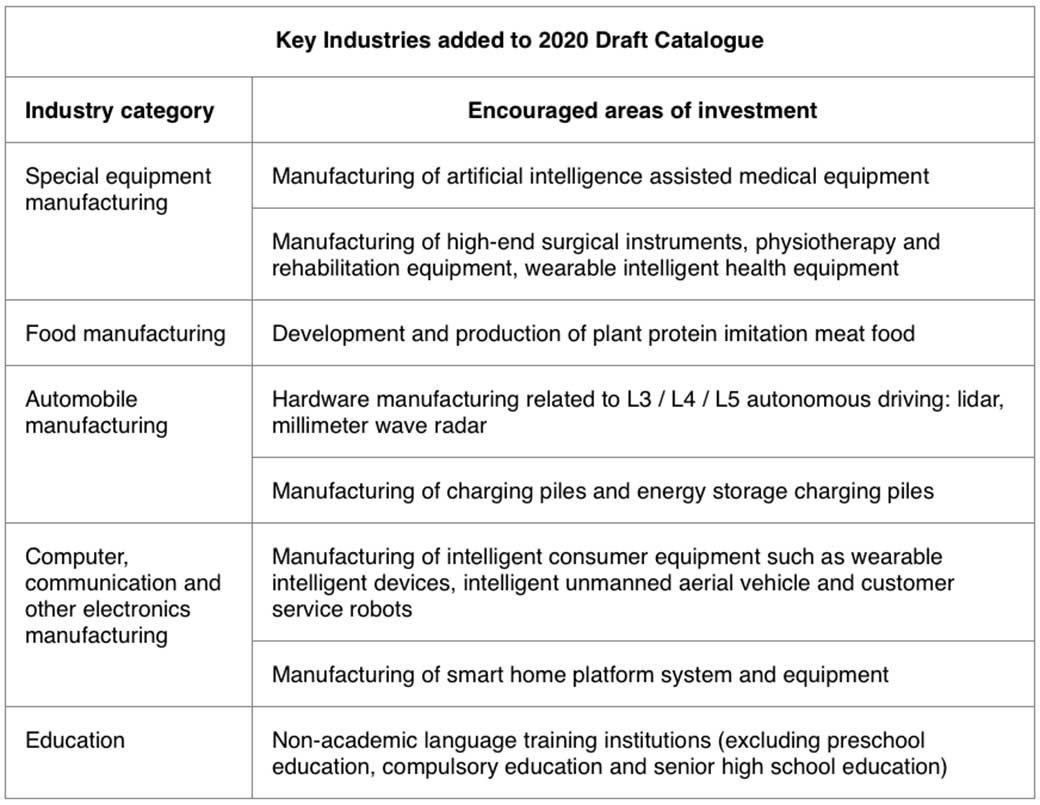 Although not directly mentioned in the Draft Catalogue, but it is reported in many news that foreign investors engaging in the encouraged industries might be eligible for preferential tax treatment (tariff exemption for importing equipment, or preferential CIT rate) as well as preferential land prices and so forth. Before the investment, it is advisory for the foreigner investor to conduct a detailed updated check with its local tax advisor.

Asiallians will keep a close eye on the above mentioned legal news.

Should you need more details, please contact us at asiallians@asiallians.com. As always, Asiallians remains at your service and our teams are currently mobilized in all our offices in China, Hong Kong and Taipei.

Beijing HR Bureau released an official notice on July 2, 2020, stipulating that ceiling amount of paying severance payment shall be based on the average monthly salary of employees working in legal entities in Beijing in 2019, which is RMB 11715 yuan/month.

Shanghai HR Bureau did not release an official notice to define the ceiling amount of paying severance payment. However, in practice, the ceiling amount shall be based on the number of average monthly salary of urban employeesin Shanghai, which is RMB 9580 yuan/month released by Shanghai Statistics bureau.
See: http://tjj.sh.gov.cn/tjxw/20200629/fc54a4124e
70400098921b6fc5680e1e.html

HR Bureau in Shenzhen and Guangzhou did not release an official notice neither. In practice, the ceiling amount shall be based on the number of average monthly salary of employees working in non-private sector, which are RMB 10646 yuan/month in Shenzhen and RMB 10292 yuan/month in Guangzhou respectively .
Shenzhen: http://tjj.sz.gov.cn/zwgk/zfxxgkml/tjsj/tjgb/
content/post_7826346.html
Guangzhou: http://tjj.gz.gov.cn/tjgb/qtgb/content/post_6433170.html

Tianjin’s monthly average salary of all employees is fixed at RMB 6323.