I. NCP Outbreak: An Update on Beijing’s Covid-19 Measures

On June 11, 2020, after 56 days of zero newly confirmed cases in Beijing, a new local case of a 52-year-old man in Xicheng District was reported. Till June 22, 2020, 236 new cases were discovered in Beijing. It is also reported that all these newly cases were directly or indirectly linked to the Xinfadi Agricultural Wholesale Market located in Beijing Fengtai District (“Xinfadi Market”). Accordingly, the area closed to Xinfadi Market is record as high-risk area. Based on newly cases reported these days, another 37 areas are recorded gradually as medium-risk areas and another 3 areas are recorded as high-risk areas. Thus, currently, there are altogether 41 areas marked as medium- or high-risk areas in Beijing.

In order to control the spread of the virus, Beijing raised its public health emergency response level from the 3rd level to the 2nd level on June 16, 2020 and implemented several timely measures. We highlight the following for your attention:

(1) Residents living near Xinfadi Market, as well as Yuquandong and Tiantao Honglian market;

(2) People who visited the markets in past 14 days and their close contacts.

3. People reside in high-risk area (currently only one area as mentioned) must be totally closed off, meaning that people must stay at home for self-observation and get nucleic acid tests.

Business buildings, markets, hotels, restaurants, canteens, factories, stores and construction sites, etc. are working normally. Till now, there is no sign to lock down the whole city. With the development of the epidemic, rules might be changed from time to time and we will keep an eye on it.

As always, Asiallians Beijing Office remains at your services, as well as our Hong Kong and Taipei office.

On June 16, 2020, the Supreme People’s Court released Guiding Opinions (III) on Lawfully and Properly Handling Civil Cases Related to the Novel Coronavirus Pneumonia (“NCP”) Epidemic. We hereby summarize the content in the below chart: 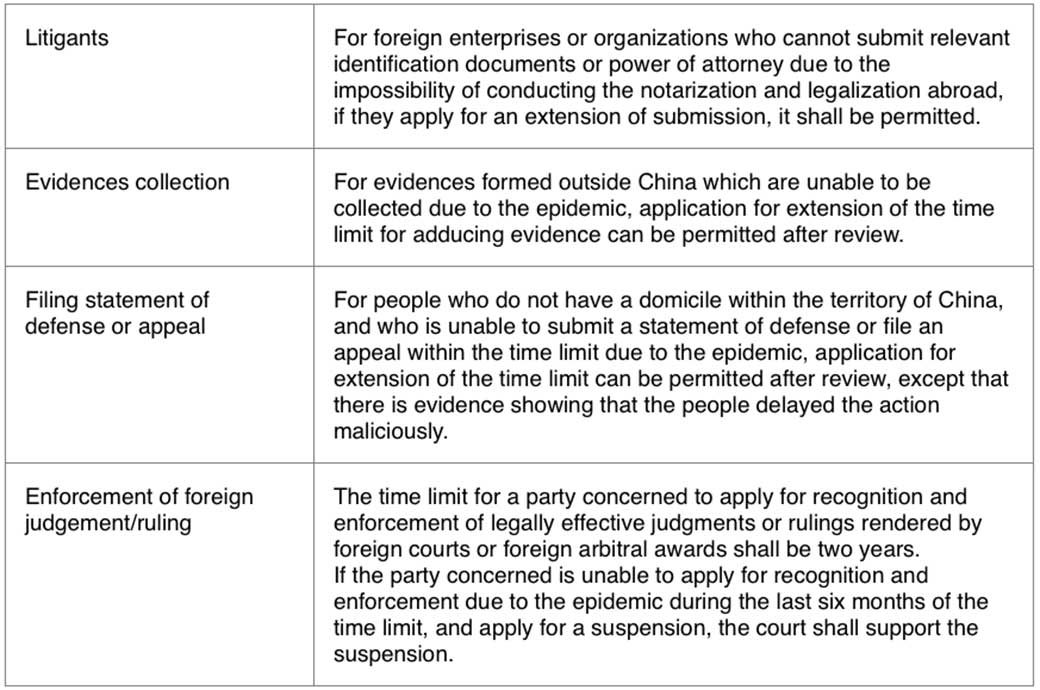